Updating the 60/40 portfolio for new realities

Updating the 60/40 Portfolio for New Realities

For many years, the default allocation for a large number of investors has been the "60/40 Portfolio" -- an allocation so titled for its 60% portfolio weight in stocks and 40% allocation to bonds.

The conditions that made this allocation work so well, however, are no longer in place. In this article, we outline other options that should help investors to meet their financial goals without taking on large amounts of additional market or credit risk.

The simplicity of this allocation was part of its strength.  Over the years, its ability to mitigate volatility without a big reduction in performance made it uniquely valuable to investors who wished not to endure the full volatility of the equity markets.

To use a badly worded metaphor:  One could have their cake and eat it, too.

This attractive mix was possible thanks to two factors that no longer exist:  Relatively high interest rates and fair valuations on stocks.  A 40-year decline in inflation and interest rates created a wind at the back of both stocks and bonds, pumping up the returns of both.

But what is an investor to do when the wind that was once at one's back is no longer blowing (with expected returns on both stocks and bonds possibly lower than has historically been the case)?

Nobel Prize-winning Yale University economist Robert Shiller famously applies his "CAPE" (Cyclically Adjusted P/E) ratio to predict both the end of the "dot com" bubble at the turn of the new millennium and the collapse of home prices in 2008.  That metric has again been flashing red, reaching a level that is among its all-time highs, indicating that stocks are overpriced.

The most common argument for owning stocks at such valuations has been that low rates make them a relative bargain.  And that makes sense since the low inflation makes future cash flows worth more today versus a period when inflation is eroding future purchasing power.  Such an environment is particularly positive for "growth" stocks that pay no current dividends, and where most of a company's value is in the future somewhere.

Given this backdrop, it is not surprising that growth stocks have outperformed their "value" cousins for more than ten years (and especially over the last four.)  But this environment leaves stocks at the high end of historic valuation ranges.

Importantly for investors, there is a strong historical (inverse) relationship between the market P/E and the returns earned by investors over the following decade.  The graphic below from Vanguard shows that high P/E's usually result in low returns over the next ten years. It also shows the relative discrepancy between valuations of domestic and international stocks. 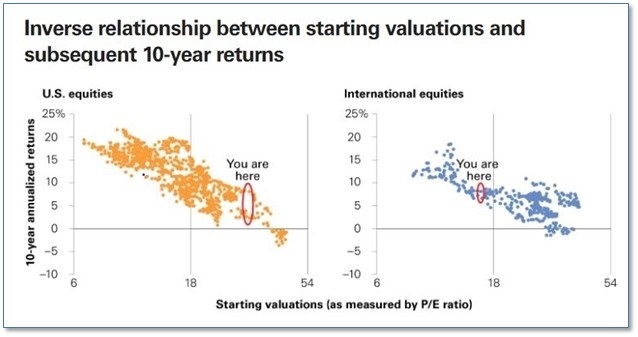 The firm's 10-year expectation for large cap US equity returns is less than 5%, with total returns for the 60/40 portfolio of just over 4.5% per year.

The benign inflation environment on which the bond bull market is partly based is not a "given" -- especially with deficit spending at record levels.  What returns will bonds deliver in future years should that wind no longer be at our back, and instead we are faced with even a modestly rising rate environment?  With miniscule coupon interest currently being paid, it won't take much of a rate rise to push fixed income returns into negative territory.

Historically, the current yield on bonds has been a big part of the total return.  But with fixed income yields in the low single digits, the "retirement math" no longer works. A 60/40 portfolio will work far less well when the investor starts with low yielding bonds and the potential for rising rates.  The "free lunch" of declining rates allowed bond returns to remain robust as a supplement to stocks.  Those days are behind us, so the old 60/40 badly needs an update.

To make the 60/40 work in the current environment, investors need to take on different portfolio exposures and different risks.  Low yielding bonds need to be replaced by, or at least supplemented with, higher yielding vehicles.  Overvalued stocks need to similarly be paired with more attractively priced choices.

But where does one find these other assets without taking on unnecessary risks?

We suggest that investors look at similar assets the private markets.  All things equal, private investment valuations are often below that of the equivalent investment in the public markets, and yields commensurately higher.  This is logical, as an investor should demand a higher return as compensation for the lack of trading liquidity.

But what if this lack of liquidity was a benefit, not a drawback?  By definition, an asset that is priced monthly, or quarterly, will have less volatility than one whose price updates every second.  That does not reduce the chance of principal loss in a private investment, of course, but it does mean that such vehicles in a portfolio will create a smoother ride for the investor.

Affluent investors and institutions each have liquidity needs that need to be carefully monitored. Those same investors likely have a portion of their portfolios that will remain invested for years or even decades to come, with no need  for funds to be distributed.  Investors who create a budget for illiquid investments can harvest the returns associated with that lack of trading liquidity.

Put another way, illiquidity risk is only a risk if one has a surprise need for immediate funds.  Illiquidity risk is one that is tolerated each day by the largest pension plans and endowments.  Private investors can likewise define their budget for that risk and invest accordingly.

The opportunity in private credit was created, in part, by the increased scrutiny of bank lending activity.  Higher capital costs associated with loans to mid-sized firms effectively forced banks into to the larger end of the lending market, creating an opportunity for private lenders to fill the void.

For bond-like investments of similar credit risk, a private credit vehicle will typically post yields higher than those of the public market equivalent.  A study by TIAA Global Asset Management found that private loans carried an "illiquidity premium" of 100-200 basis points (1-2%) versus syndicated loans, despite a lower default rate.

Middle market lending has even higher interest rates than one finds in the public or large corporate market, on top of the illiquidity premium.  In fact, it is not unusual to find private lending vehicles yielding upwards of 9%.  It is also important to note that private loans could be based on floating rates, reducing the interest rate risk of the instrument to the investor should rates rise.

There are many different segments of the private lending market, with varying risk and return characteristics.  Investors are wise to carefully consider the characteristics of each one.  The bottom line is that this segment is fertile ground for portfolio yield enhancement.

The catch-all term of "private equity" is used here to include private investments across a wide array of categories. Investors have the opportunity to invest in hedge funds, private real estate, infrastructure projects, venture capital and true "private equity" vehicles, among others.

The characteristics of such investments will vary greatly, of course, but a common theme across many of them is higher cash flows versus publicly traded securities.  It is not unusual to see private investments with cash flow yields between 5 and 7 percent.  In the public equity markets, the S&P500 has a current dividend yield of less than 1.6%.

Meanwhile, other private investments are not focused on cash generation.  From venture capital in startups to buyouts of established firms, these types of vehicles are instead geared towards appreciation.

The attraction to these asset classes has been their historic return premium over listed equities.  Cambridge Associates estimated this return premium to be 500bp per year over the 25 years through 2016. Retirement fund CalPERS (in the graphic below) showed a 500bp return advantage for their private equity investments over their public ones over a 20-year period. 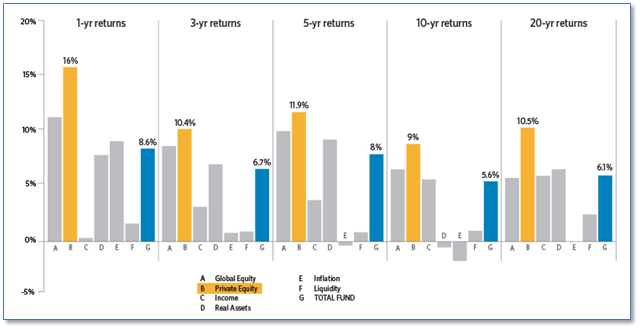 Investors are cautioned that averages can be deceiving.  The so-called "vintage year" of a private fund is among the most important factors in determining whether a particular fund does better or worse than the average.  Years following recessions have typically been among the better vintages for both venture and private equity funds.

Niche-focused lower and middle market strategies often overlooked by large, mainstream investors and purveyors of mega-sized private funds.  These strategies are difficult to execute at a $1bn scale. And they often rely more on micro-level strategy execution than macro-level valuation upgrades.  Their "alpha", therefore, is dependent on different drivers than those that move impact the fortunes of the broader market better portfolio diversifiers.

Investors can draw conclusions from the relative success of other investors who have walked a similar path.  Cambridge Associates tracks thousands of institutional investors with varying allocations to alternatives. Their simple conclusion was that the most successful of these investors were the ones who allocate more than 15% to alternative investments, averaging more than a 1.8% return advantage over those who allocate just 5%. 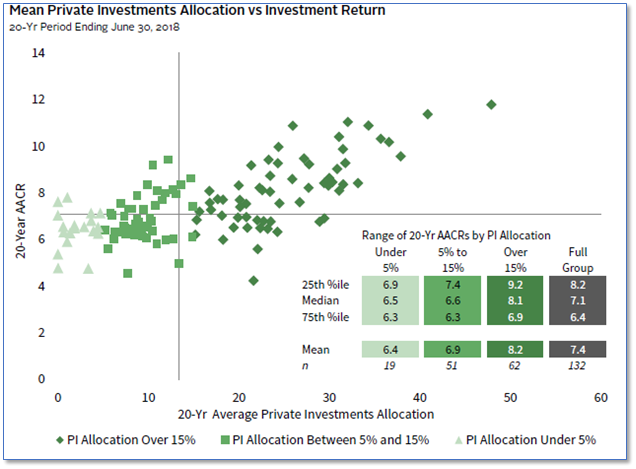 In the current environment of low interest rates and richly valued stocks, these lessons can be liberally applied to the 60/40 portfolio.  Individual investors and small institutions have the added benefit of being able to execute niche alternative strategies to potentially enhance their long-term returns.

The Fed's Gymnastics: Can They Nail the Landing?

The tug-of-war between inflation indicators and "Fed Speak" continues to occupy investors attention.  Can the Fed engineer a soft landing? Or will the confluence of uncertainty and tax loss selling undermine a nascent market recovery?