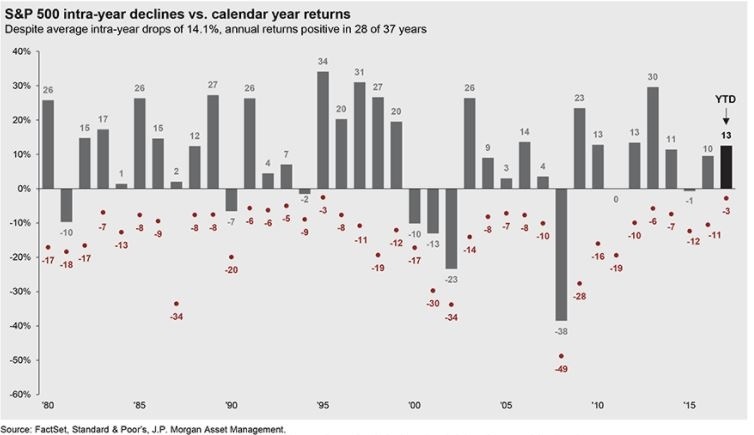 The bull market for US equities accelerated in the third quarter, with the S&P500 adding nearly 4% to reach a 12.5% return for the year-to-date.   The markets remained relatively unfazed by multiple hurricanes and geopolitical concerns, as a "Goldilocks" economic environment, that's not too hard and not too soft, persisted both here and abroad.  Continued low inflation, a robust consumer and surging earnings growth were solid underpinnings. 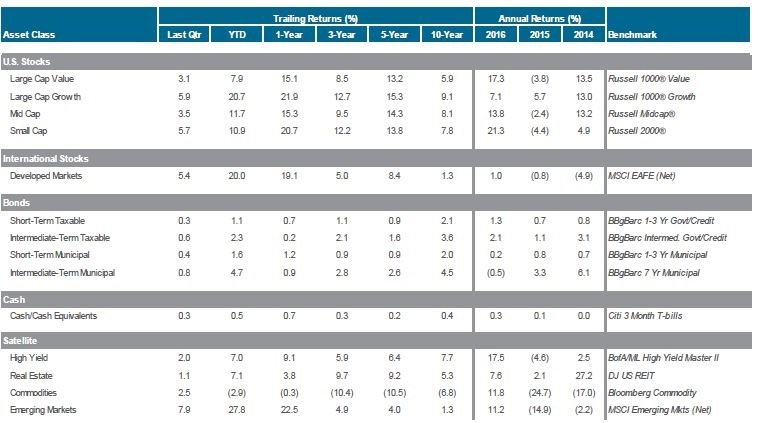 To say that this bull market is getting long in the tooth is an understatement.  2017 marks nearly nine years of this positive market phase, and this year has been characterized by unusual calm.  In fact, September 2017 was the least volatile month for the S&P500 since 1964.  And 2017 is only the second year since 1980 not to have an interim decline of five percent, or more.

Stocks did show some unique characteristics in the third quarter and for 2017, reflecting the earnings-driven nature of this rally.   Tech stocks have widely outpaced other sectors, with the tech-heavy NASDAQ advancing by more than 20 percent this year, and almost 6% last quarter.  Meanwhile, so-called "value stocks" have lagged badly in 2017, posting less than half of the return of their "growth" cousins (who look a lot like the NASDAQ Index.)

Foreign stocks added to returns in the third quarter as European, Japanese and Emerging Market economies enjoyed the first synchronized expansion in recent memory.  This, combined with a weaker US dollar, resulted in solid returns among developed (19%) and emerging (+24%) equity indexes in 2017. 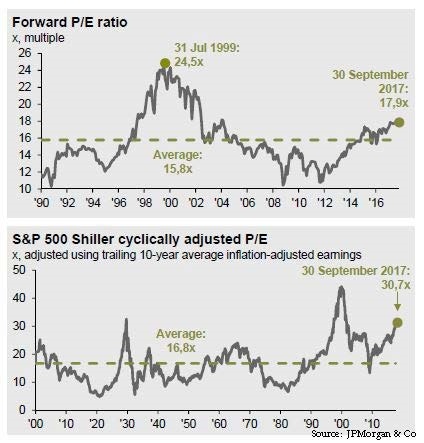 Bull markets tend not to exhaust themselves from overvaluation. High P/E's just aren't a timing tool.  But we do know this from history: Buying at elevated Price-to-Earnings (P/E) Ratios, such as we have today, has seldom led to high returns over the ensuing decade.  So, our expectations are appropriately moderated, and regularly proven to be wrong!

It is true that investors remain focused on the here and now -- and don't seem all that worried.  It's difficult not to get complacent when economies are humming around the globe.

But, we've seen this drill before: "This time it's different", they say.

But, is it really?  Signs of complacency are visible in more than just stocks.  Private equity funds are again flush with cash, yet valuations remain extremely high -- meaning the future returns are likely to be sub par.  Top-ranked managers with decades of experience are stepping back, but newer entrants are plowing forward with deals that are unlikely to earn profits for their investors.

Let's not forget that, while stratospheric valuations may not end bull markets, tightening monetary policy does.  Any uptick in inflation may upset the Goldilocks investor expectations and result in, at a minimum, the correction that we have all been expecting, but haven't seen.  Should the Fed move its foot more to the brake, or worse yet, send the message to the market that it isn't worried about inflation (i.e., by not raising short term rates), we should expect to see a sharp downdraft in the equity markets around the world.

Investors are notoriously bad at identifying these turning points before they happen. And betting that the Fed fails to keep inflation in check is a pretty high risk bet to make. So, our approach is to periodically rebalance portfolios back to their strategic equity exposures, skimming some of the cream, but remaining fully invested in stocks, while favoring foreign markets slightly over domestic ones.

In the fixed income space, we are being somewhat more proactive, increasing portfolio positions in floating rate securities that will better handle a rising rate environment.  Specifically, we are looking at positions in senior bank loans -- an asset class that many investors needlessly overlook. Diversified portfolios of bank debts often carry floating rates (that profit from a rising rate environment), are senior to other bonds (so are a little safer), and have interest rates that are the same or higher than many fixed rate instruments.