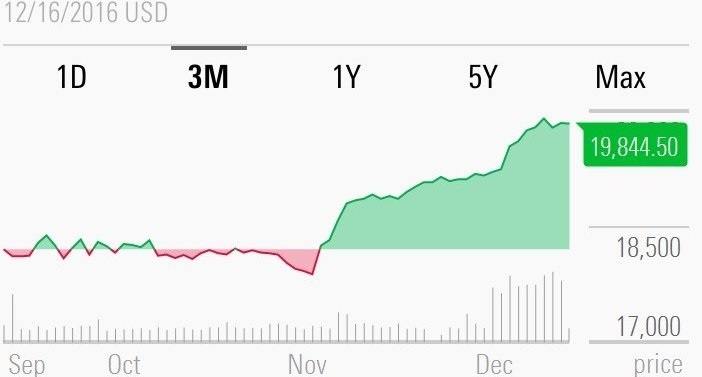 Making Sense of the "Trump Rally"

As the outcome of US presidential election began to come into focus, markets around the world fell sharply. Even US stock futures fell, signaling a tough morning was ahead of us. But by 9:30am Eastern Time, investors had begun to assess the short term positives of a Trump administration. Since that time, US stocks have surged by around 6%.

The question on many investors’ minds is this:

Are there logical and substantive underpinnings to this rally?

The answer to this question is generally “yes.” At least in the short term.  Beyond that, “unpredictability” seems to be the only thing that is predictable. Sabre rattling with China and other trading partners may ultimately cause the market some indigestion. But for now, investors are focusing on several other factors: Deregulation, corporate tax reform and infrastructure spending. We’ll address each of these to see how it might continue to underpin stock valuations, or conversely, prove to be a temporary phenomenon.

Market action since the election makes it clear that investors expect the controls on the financial sector to be greatly reduced. In fact, shares of Goldman Sachs have appreciated to such a degree that the performance of this one company accounted for almost 1/3 of the rise in the DJIA.

It’s premature to assess what form this deregulation might take. Throughout history, a wide open banking system has led to excesses that end up badly. Have we learned our lesson about that? Probably not. If nothing else, rising interest rates are a net positive for the financial sector.

Environmental regulation is another area likely to get some attention (or be allowed to atrophy) under the new administration. Neglecting the Clean Power Plan will benefit some electric utility companies with large coal-fired portfolios.  At the macro level, however, this seems unlikely to be a huge factor in the direction of the financial markets, as a whole.

Unfortunately, investors’ actions are (collectively) amoral, usually failing to incorporate long term societal issues.  The heat can be slowly turned up on the pot and we’ll fail to notice, paying more attention to the noise, flash and earnings posted each quarter. The good news is that hundreds of companies have recommitted themselves to invest in carbon reduction strategies and renewable energy because they make good business sense – independently of the party in power.

This is the “big dog”, in my opinion. Trillions of dollars are stashed in overseas subsidiaries of US companies. Even some sort of temporary “amnesty” could cause those funds to flow back into the US. If even a fraction of these dollars are permanently invested in US operations or stock buybacks, it could be quite a stimulus to the economy, and the market.

A longer term plan to reform the tax code could have both positive and negative implications. Most economists have asserted that draconian changes to the tax code would balloon the deficit – something that republicans in the House of Representatives have long railed against. In other words, talk is cheap. Real tax reform has been illusive over the years, but from a shareholder perspective, any action to reduce corporate tax rates is unequivocally positive for corporate earnings. We discuss further below, in real numbers.

This third element might be the one least likely to underpin the rally longer term.  A narrow segment of the market benefits from spending on bridges, airports, highways, etc. While good for employment, with the unemployment rate under 5%, it’s hard to see how this will be a policy priority. In fact, the US economy is growing at more than 2 1/2%, the Fed is raising rates, and the strong dollar is starting to put pressure on US exporters.

The economy doesn’t need stimulus right now, so the bond market’s reaction is highly logical: Rising rates at the intermediate and longer end of the yield curve. The bond market is saying that the “inflation genie” is starting to leave the bottle.  Wages are finally rising.  And once the genie’s out, it’s hard to put back in.

After weak earnings for the past year or more, stocks look expensive when looking backward. The S&P500 is selling for 22.5 times trailing 12-month earnings. Clearly, this is on the very high side of history. Looking to the next twelve months, however, stocks are more fairly valued at about 20 times earnings. And when one factors in the potential impact of lower corporate tax rates, the picture brightens further. Some analysts expect a 5-10% improvement on S&P500 earnings on lower tax rates alone, putting stocks at closer to 18 times earnings.

Even after the rally, US stocks look solid -- given the positive economic and earnings outlook and the prospect for lower tax rates. Consumers are feeling pretty good, too. The University of Michigan consumer confidence survey is now at 98 – higher than during the housing boom.

So, where is the “fly in the ointment”? Excessive optimism perhaps.  There is very little bearish activity in the market right now, which is usually a bad sign.  Moves this fast usually retrace themselves somewhat. And to be honest, no one really has no idea how far these policies will progress. It’s all speculation at this point.

So, for now, the trend is investors' friend. But we’ll be looking at client positions relative to their strategic plans to see if maybe we shouldn’t skim off some of the cream.

The Fed's Gymnastics: Can They Nail the Landing?

The tug-of-war between inflation indicators and "Fed Speak" continues to occupy investors attention.  Can the Fed engineer a soft landing? Or will the confluence of uncertainty and tax loss selling undermine a nascent market recovery?